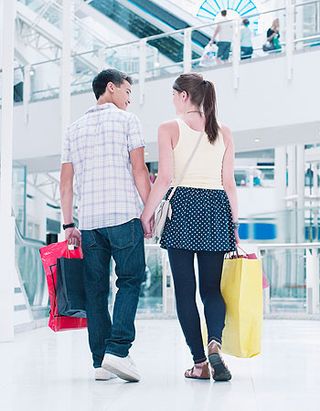 Clothes shopping with my boyfriend is about as romantic as communal nose picking. Especially if I don’t actually know what I want, but am “just browsing” (in the shops, not up my nose). We’ve only ever attempted it about three times in six long years because we both know that for a month afterwards we’ll like each other a little bit less and look sidelong at the other through narrowed eyes whenever a horror-tinged memory leaps into our heads unannounced.

A new survey of 1000 men and 1000 women by Lakeside Shopping Centre found that men, on average, spend 26 hours per year waiting for their partners outside changing rooms. That’s twenty six whole hours of checking the football scores or browsing Facebook on their phones, eating or drinking, calling a mate or just, you know, waiting patiently.

And the weirdest thing? 46% of these men said they actually enjoyed coming along. Were these men asked this in front of their bag-laden squinty-eyed girlfriends? Or were they just drunk? I’m flabbergasted by these results. This is what happened when Ben and I last went shopping together and I picked up a lovely strappy dress:

“Ooh, do you like this?” I asked.
“I think you look better in dresses with sleeves,” Ben replied.
“Um, what?”
“Yeah, you know, little sleeves. They always look nice”
“Are you saying I need to cover my arms for some reason?”
“No, don’t be ridiculous.”
“You are, aren’t you? You’re saying I have BINGO WINGS.”
“I’m hungry. Shall we get something to eat?”
“Yeah, alright then.”

And that was the end of our shopping date. I’m not even a very self-conscious person and he’s actually right, I have lots of nice dresses with sleeves and they look lovely, but for some reason the fact that he didn’t just immediately think I’d look jaw-droppingly amazing in anything made me turn into a sleeve-obsessed lunatic.

And even if he’d said he loved the dress and was sure I’d look like Angelina Jolie crossed with Scarlett Johansson in it, I’d have panicked that it was only because he was bored and wanted to leave. And forget him being bored, I’ll be bored too. I have a three hour shopping threshold when there’s someone with me. On my own I could go for days, but when you have to think about someone else? It gets tedious real fast. No one’s a winner in that situation.

It’s like an even more fraught version of the moment I hand him the piece of clothing I’ve spontaneously bought him for no other reason than I thought he might quite like it… Quickly followed by his gallant, “This is LOVELY!” face as he tries to work out the best way to return it without hurting my feelings. Why put yourself through that for 26 hours a year – and that’s just the waiting part, the actual “do you like this?” part lasts much longer.

And that’s the problem with shopping with your boyfriend: it triggers some kind of insanity nodule in your brains (no, I don’t care if brains don’t have nodules) and you both start huffing and puffing like exhausted bears for no reason at all. A successful joint shopping trip is arare beast indeed. I think the only way to navigate potential anger and recrimination is to have pub and snack trips staggered hourly throughout the day where you can regroup and work out the best plan for survival.

For all those couples out there that really do enjoy shopping together, I salute you. And I’ll be sure to tell your boyfriend to suggest getting a dress with little sleeves on it when I march past him into the changing room.

Hi, I am Solanki. This is my personal blog. I am a Fashion Designer as well as a editor specializing in books for reader in Fashion, Lifestyle, Shopping as well as Skin Care.